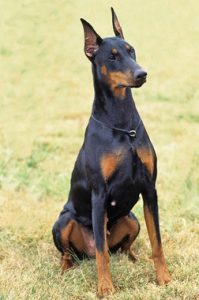 Bloat is a common disease seen in large and giant breed dogs, where the stomach accumulates with gas and fluid and distends to a dangerous point. Unable to expel the gas and fluid, this distension leads to a painful, tense stomach that is prone to rupture, or twist on its axis, complications that are very serious and life threatening. Once a dog has an active bloat, alternative medicine has little to offer, as the stomach needs to be decompressed as soon as possible, either by passage of a stomach tube, or surgically. Thus, this article is focused more on prevention for dog breeds are prone to bloat, as well as prevention for dogs who have already survived one or more episodes of bloat.

Given the strong genetic link with bloat, for dogs that are genetically predisposed to the disease, it is believed that it is not a question if a particular dog may bloat, it is a question of when. Since the industry has yet to have effective genetic marker testing, we cannot really know for certain if a dog may be genetically prone to bloat, unless there is a known immediate relative of the dog that had a confirmed case of bloat. Subsequently, without effective testing for predisposition to canine bloat, if you are the owner of any large or giant breed of dog (70 plus pounds), you should simply assume that your dog is prone to bloat and take preventive measures to give the dog his best chance to avoid a bout of bloat.

Prevention starts with diet. You should start by avoiding starchy foods, such as processed grains and simple carbohydrates. Simple carbohydrates are not only pro-inflammatory, but they also tend to increase bowel secretions, potentially setting the stage for gut distention. Instead, carbohydrates should be complex in nature, best supplied by vegetables.

Diets should be high in protein and moderate to low in saturated fats. Protein should be of high biological value, meaning that it is easily broken down during digestion; a high percentage of it is absorbed, while only a small percentage is excreted as waste. Poultry based protein sources, rabbit, and venison are examples that tend to fit these criteria quite well. Lean beef is a good option if fed raw.

Regarding raw feeding, done correctly and engaged with maximum safety precautions, there is anecdotal evidence suggesting a decrease in the incidence of bloat in predisposed breeds fed raw. However, given the AVMA’s (American Veterinary Medical Association) stance against raw feeding due to the risk of raw food bacterial toxicity, there is little peered reviewed and/or veterinary college based studies that substantiate this observation at this time.

Pharmaceutical grade omega-3-fatty acids are another good preventive measure against bloat. Omega-3-fatty acids are naturally anti-inflammatory at virtually every tissue level, and the gut is no exception. Digestive enzymes that aid in the breakdown of nutrients for absorption represent another dietary supplement that is a good sense preventive measure for bloat. Maximum breakdown of nutrients leads to maximum absorption, which in turn leads to less gas and fluid accumulation in the gut.

Small, frequent meals are ideal for dogs that may be predisposed to bloat. Breaking down the daily food requirement into 3-4 small meals makes certain that the gut is not filled substantially at any given time. From a metabolic perspective, this approach also helps to maximize metabolic efficiency to help prevent obesity and a stagnant metabolic rate, two predisposing factors for bloat.

For young female large and giant breed dogs that are to undergo a spay sterilization procedure, request that while your veterinarian is in the abdomen performing the spay, that he also tack the stomach to the body wall. That way, if the dog experiences bloat in her lifetime, the stomach tack will prevent the stomach from twisting. Tacking the stomach adds only a small amount of surgical time to the spay, requires only a slightly larger incision, and only a modest increase in cost. The result, however, may prove to be priceless, as prevention of stomach twisting in the midst of a bloat episode may mean the difference between life and death.

I will reiterate that there is a strong genetic link to the development of bloat. As such, sometimes despite our best efforts to prevent the incidence of bloat, it still occurs. However, following the natural prevention measures outlined in this article, will give your big dog his/her best chance to avoid the pain and danger of bloat in his/her lifetime.