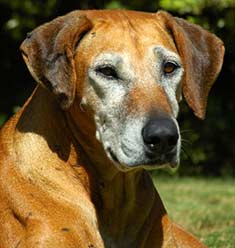 The reason for the progressive brain dysfunction is because with age, the following occurs:

1.) The brain atrophies, that is, it decreases in size and mass with age. In addition to the decrease in size, the overall number of neurons in the brain, the cells that comprise the brain and central nervous system, decrease in number. The result is a decrease in brain function.

2.) There is an increase in beta amyloid plaques. Beta amyloid is a protein that accumulates in the brain over time and directly damages neurons, leading to cognitive impairment.Numerous micro hemorrhages (bleeds) and clots that form in the vasculature of the brain reduce blood circulation, which leads to oxygen deprivation to neurons, which in turn leads to neuron damage, death, and overall cognitive impairment.

3.) The important neurotransmitter, serotonin decreases with age, which contributes to interrupted sleep/wake cycles, confusion, and fear.

The natural approach to management of senility in dogs must begin with early recognition. Thus, if you begin to notice odd “quirks” in your dog’s behavior as he/she ages, do not just write it off as age related eccentricity. In a recent study of 69 senior dogs completed at UC Davis, College of Veterinary Medicine, it was determined that 32% of dogs over the age of 11 had signs of senility, while 100% of dogs over the age of 16 years had confirmed senility. Following recognition of the signs of senility, begin a diet rich in anti-oxidants to minimize free radical damage to the brain that occurs with more frequency with age.

S-adenosylmethionine (SAM-e) is a supplement that has known protective and regenerative properties toward the liver, and has a well-established use in veterinary medicine for alternative management of liver disease. While the mechanism is not known for certain, SAM-e has also shown a reduction in clinical signs associated with canine cognitive dysfunction.

St John’s wort is an herbal supplement known to increase serotonin in the brain. The increase in serotonin helps to reverse the reduction of this important neurotransmitter that commonly occurs as the result of senility. The effect of increasing serotonin levels in the brain, includes reduction in confusion, fear, as well as more consistent and better sleep.Early recognition and aggressive nutritional management are the best methods to combat this common disease of aging dogs. This type of intervention before significant irreversible damage has been done to the brain, not only significantly slows the progression of disease, but can even turn back the clock on the aging of the brain.

A Wonderful Cause For Animals And People – Heifer International