I just returned from the Veterinary Meeting Expo in Orlando, a large veterinary continuing education conference.  One of the most enlightening days I spent was attending a series of lectures put on by a prestigious group of integrative veterinary specialists.  This article is based on what I learned about foods derived from GMO and why it is widely believed to be one of the prevalent reasons the incidence of cancer and other metabolic diseases in dogs and cats are vastly on the rise (statistically, more than 50% of dogs and cats born in the last decade will die from cancer).  This article will focus on the likely role GMO derived pet foods will play in that troubling statistic, but fresh of my conference much more is to follow!

GMO stands for genetically modified organisms.  Specifically as it applies to food, the most passionate debate about GMO is its widespread use in agriculture where food crops grown from seed that is genetically modified to produce plants and their food yields that are resistant to damage from the mass spraying of an herbicide (weed killer) called Round Up.

Round Up and GMO seed were originally patented and mass produced by a company called Monsanto.  Critics of the use of GMO point to two troubling aspects of GMO: 1.) The resultant strains of produce food crops that are disruptors of the body’s hormone systems; and 2.) rather than having to take more care in spraying just the weed areas of their crops, farmers with GMO crops genetically modified to be resistant to damage from the herbicide, may now instead be less discerning and spray larger, widespread quantities.  The latter results in more herbicide sprayed directly on our food (and hence more direct consumption), more herbicide in the groundwater and soil, and a net compounding effect of the already inherent hormone disrupting effects of the food the crops produce.

In 2012, a group of French scientists performed a study of GMO derived corn with test rats.  The genetic line of rats used in the research has a long established history of control data and is widely used in scientific studies.  The study was published in the scientific journal Elsevier.

The findings of the research found an unusual statistically high incidence and mortality rate in rats fed GMO corn via kidney disease, liver disease, and most significantly, the incidence of mammary cancer (equivalent to breast cancer in people).  Once published in Elsevier, the store and the research behind it was vehemently attacked via a mass letter writing campaign.  Elsevier under mounting pressure, retracted the article in 2013.

It was later discovered that a majority of the letter writing and dissenting scientists of the French study had either direct or indirect financial ties to Monsanto.  This eventually led to a republishing of the article with all of its research findings in the German run scientific journal, Environmental Sciences Europe, in 2014.  French researchers that published the study have maintained the integrity of their research on GMO and Round Up and considered the initial retraction scientific censorship.  Here is an actual image of malignant mammary tumors that developed in test rats used in the study: 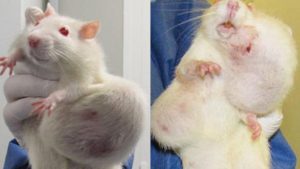 GMO remains banned in France and most European countries.  On the other hand, 95% of corn consumed in foods in the United States by pets and people comes from GMO crops.

I will leave you with an interesting development in the field of GMO…Monsanto no longer exists.  The company was purchased by animal and human pharmaceutical giant, Bayer.

Natural Treatment Options For Stress/Anxiety In Dogs And Cats

What Is Your Pet’s Microbiome And Why Is It Important To Know About It? 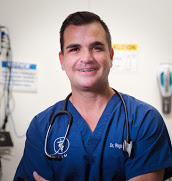 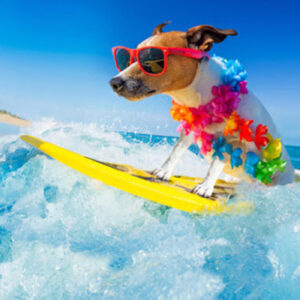