Bernie improbably celebrated his 13th birthday showered with love from his family and served a well deserved Bubba Burger for dinner.  I say improbably because his orthopedic conditions had combined so severely in November of 2018 that I did not know if I could return and maintain Bernie’s quality of life sufficiently enough to justify keeping him with us even through the holidays.  That is one reason Bernie’s birthday this year now over two months beyond the holidays is so special.

Another reason Bernie’s life is so special besides being the living embodiment of gentleness and love is because he came into my life at the age of 4 months with such severe fractures of his left elbow that it needed the expertise of a veterinary surgical specialist to repair them.  Even with Dr. Jeff Christiansen’s expertise and a brilliant surgery performed (ultimately requiring two pins, a plate, and a lag screw to stabilize the fractures), his prognosis to have full use of his limb was guarded.  Ultimately, Bernie would make a phenomenal recovery, grow to be a strapping 86 pound elegant looking dog that could run, swim, and bound around as well as any Labrador Retriever.  Bernie would also be a major part of my journey toward being an integrative veterinary practitioner. 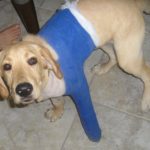 Bernie in a spica cast recovering from surgery 2006

I began my integrative walk with Bernie immediately after he recovered from surgery, starting him on a veterinary grade joint health supplement and an omega-3-fatty acid supplement, while taking pains to make certain he remained lean.  By 5 years of age, I started giving Bernie monthly injections of Adequan, a joint health nutraceutical whose base molecule is polysulfated glycosaminoglycan known to maintain and regenerate the cartilaginous surfaces of joints.  He was not showing signs of slowing down but I was being preemptive in proactive with his care.

By the age of 9, Bernie was starting to show signs of wear and tear, not just in his repaired arm, but in his mid back and showing some stiffness typical of generalized arthritis in the major joints of his long bones.  By this time, I was regularly recommending therapy laser which I added to Bernie’s regimen.  I had also gotten qualified in dry needle acupuncture and  started that on Bernie as well.  When he was extra stiff from having played extra hard in the pool with the kids, I gave him an occasional anti-inflammatory pill for relief.

By 12 years, Bernie’s back condition had progressed to causing weakness and instability in his rear limbs.  In addition to all of the above, I got trained in stem cell therapeutic application and Bernie was my first case.  The results were nothing short of extraordinary and his case study became the basis for several cases I have performed stem cell since.

However, 8 months later in November, Bernie’s rear limb neurological issues not only returned, they worsened and gave Bernie a perfect storm of arthritis aggravated by neuromuscular disease.  He could barely rise of a lying position without help and could not stand or walk for very long.  Feeling I had nothing to lose, I started Bernie on the corticosteroid prednisone which stabilized his condition.  Fully aware that this was an advanced, end stage option, I was trying to get Bernie through the holidays for the sake of my children who have known Bernie all of their lives (my wife and I rescued Bernie 2 years before we had our first child Austin, now 10)  amd being honest, for myself.  I vowed as I have with all of my pets, however, that I would never allow him to suffer in order to prevent our grief.

At this point, I reached out to a colleague that is traditional Chinese Medicine certified that performs electroacupuncture, a high tech version of acupuncture that sends gentle volts of electricity through strategically placed needles, known to be effective in restoring neuromotor function in cases of degenerative and compressive spinal disc disease of the back.  Bernie responded incredibly and I was able to wean him off of the prednisone over the course of 3 weekly electroacupuncture treatments.  In addition to dry needle acupuncture, therapy laser, joint chews, omega-3-fish oils, and therapy laser, Bernie currently keeps up with maintenance treatment with electroacupuncture once every 3 weeks.  Bernie also relies on daily treatment with the anti-inflammatory meloxicam.

Bernie’s quality of life remains adequate.  I know his time with us is numbered, so I implore my family to greet every new day with Bernie as a gift.  Without veterinary integrative medicine, we would have been denied so many gifts we have been blessed with from each new day with our beloved Bernie we otherwise would not have had.

Happy birthday my boy!  Beyond years of unconditional love and joy, you have also helped to make me a better doctor.