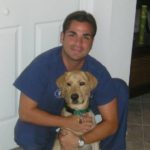 I love this quote from the legendary stand up philosopher, George Carlin.  Most dogs lovers can really identify with the concept captured in this quote, as the various stages of our lives have in large measure been influenced and characterized by the dogs that shared our lives through those eras.

In the image above Bernie and I were much younger.  He was an owner surrender because the family could not afford the orthopedic surgical specialist needed to repair a severe fracture of his left arm.  There was significant concern that he my not have function of the limb even with surgery.  I personally had serious concerns that the fracture may have occurred as the result of abuse (the story the family gave me did not add up to the severity of this fracture and I never met the husband).

My plan was to pay for the specialist, rehabilitate Bernie and once recovered, I would find him a good home.  At the time I really did not want to take on another dog, already having a yellow lab named Tiffany, a Border Collie named Lulu, and my wife’s Yorkshire Terrier, Bear.  Tiffany was 8 years old and especially dear to me because she was my first dog that was all mine, not the family dog.

I adopted Tiffany when I was a senior in college.  As my education and career took me abroad and all over the country I met my future wife and got married, Tiffany was always at my side; her reassuring and loving presence always preventing me from feeling lonely and missing home.

In the process of rehabbing Bernie, he became very attached to me and I quite fond of him.  He made a full recovery and just kept a sideways orientation of the paw of his repaired leg that went right along with his goofy personality.  I did not have the depth of the love I felt for Tiffany, but he was such a sweet boy and after all Bernie had been through, I could not bring myself to create more uncertainty and change in his life; so I decided to keep him.

2 months after having adopted Bernie, Tiffany became ill with lymphoma.  After 2 months of treatment she lost the battle.  Unable to allow her to suffer any longer, I made the devastating decision to humanely euthanize her one month shy of her 9th birthday.

Losing Tiffany was the most tragic loss of my life at the time.  Although I has experienced the loss of 2 family dogs and my beloved grandmother, Tiffany’s loss hurt more than anything I had ever experienced.  I felt like a piece of me had died along with her.  I recall turning to Bernie and apologizing to him because I would never love him the way I loved Tiffany.

Over time, however, Bernie became my rock that helped me grieve and recover from the loss of Tiffany.  He grew into an 86 pound beautiful yellow lab and had the most kind and gentle disposition.  Whereas Tiffany was highly intelligent, dignified, and graceful Bernie was a goofy bull in a china shop.  I quickly learned that I would love Bernie every bit as much as I loved Tiffany, just in a different way and occupying the different place in my heart.

Bernie and I became virtually inseparable.  I took him to work with me every day and to every function, as my immediate and extended family fell in love with him as well.  In Bernie’s 13 plus years on this earth, he was with me for the next phase of my life as an entrepreneur, father of young children, and community person.

He was the perfect dog to raise children with, as gentle and sweet with them as any dog could be.  He swam with my son and daughter whenever they went in the pool and would snuggle with them on the couch.  They knew him all of their lives (son is 10 and daughter is 8). 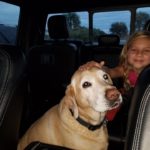 Two and a half years ago, I diagnosed Bernie with degenerative disc disease of the spine.  Through Bernie, I pushed the limits of integrative veterinary medicine, extending his quality and quantity of life with stem cell therapy, acupuncture, nutraceutical therapy, non-steroidal anti-inflammatory medication, nerve pain medication, cannabis, and therapy laser.  Through Bernie, I not only received unconditional love and companionship, he also made me a better doctor.

Inevitably, the day recently came that I had to say goodbye to my dear, sweet Bernie, as his disease took away his quality despite my best therapeutic efforts.  He was the first Welton family dog and we all grieved together as a family.  Through a remarkable turn of irony, our family had been blessed with another owner surrender yellow lab in August 2018 who was 8 weeks old at the time with a mystery neurological condition where she would have episodes when she had compromised balance, sometimes even stumble and fall over at times. 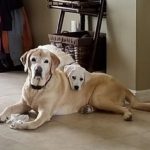 The previous owners were good people and loved the puppy but could not justify all of the expense of testing that would be necessary to figure out what was wrong with her and so many unknowns as to whether treatment would be successful or even possible.  $3000 and a trip to the veterinary neurologist later, we figured out that Stella (so named after the beer because her episodes make her look drunk), we discovered that she had a treatable condition called Canine Epileptoid Cramping Syndrome, a rare and thankfully mild, treatable form epilepsy.

Whereas Bernie was the dog that ushered in my life’s era of raising a family of small children, Stella will usher in their transition into teenagers and young adults.  When Stella turns 8 my oldest child Austin will just be starting college, my daughter Scarlett will follow 2 years later.

Like Bernie at the time Tiffany had just passed, while I love Stella, she is still a silly puppy not yet possessed with the dignity, familiarity, and routine Bernie and his family have built together.  But she is also gentle, very sweet, intelligent and well on her way to growing into a great dog.  Her neurological condition is virtually non-existent, responding favorably to a gluten-free diet, Calming Care probiotics, and the mild anti-convulsion medication, levetiracetam.

R.I.P. my sweet Bernie Boy, thank you for so many years of love and joy you brought to our family.  We will carry you in our hearts for our entire lives until we meet again. 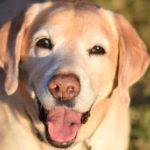 Dog Or Cat Fart A Lot? Something May Be Wrong.

Why Are GMO Foods So Bad For Pets And People?