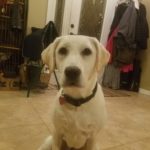 A few weeks ago in the face of the loss of my beloved long time yellow Labrador Retriever, Bernie, I lamented about special dogs that accompany us on life’s journey becoming intrinsically woven into the very fabric of our lives and in many ways come to define and represent those seasons of our lives.  In Life Is A Series Of Dogs, I wrote about the part of my life’s journey Bernie shared with me and touched on my Stella and the part of my life in which she will have her role.

While the outpouring of so many friends, fans, and the support of my family have done so much to comfort my grief over the loss of Bernie, Stella has been my little rock through this rough patch.  She is still very much a goofy puppy, but are starting to  sense her intelligence and feel the familiarity that grows as dog and human souls connect.

Stella is extremely affectionate and must be in contact with her human family members at all times, laying on our feet as we cook or brush our teeth, or laying her chin over our shoulder as if she is hugging us when we are sitting or laying down. 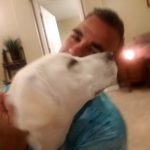 Like Bernie, Stella came into my life unexpectedly and unplanned.  My management team called me on my day off about an 8 week old yellow lab puppy that was purchased by a family off of Craig’s List that seemed developmentally normal, but had occasional episodes of poor balance and weakness of the limbs.  Given the possibilities and unknowns of what we may discover plus the expense of the necessary testing, the family struggled with the reality that they just did not have the resources or wherewithal to take on in a puppy that had just come into their lives.  My team had suggested owner surrender to the clinic and was asking my approval which I promptly gave.

The next day shortly after rounds, the puppy was dropped off and the very second I looked at her I told my team that she would be my puppy.  They all kind of smiled at one another, as if they knew this was exactly what would happen.  She came with a different name than Stella, but my team and I named her Stella after the beer because her neurological episodes made her like like she had one too many to drink.  I brought Stella home and immediately got the approval and support of my wife, and of course the children were smitten with the puppy.

Following a battery of costly testing and a trip to the veterinary neurologist, we discovered that Stella has a mild presentation of epilepsy called Canine Epileptoid Cramping Syndrome.  Some of the known triggers of the condition are excitement, stress, and oddly, ingestion of gluten.  It is effectively managed with a virtually non toxic and mild anticonvulsant medication, Keppra, and a gluten free diet.  We also supplement her diet with a mind calming probiotic called Calming Care.  For several months now, her episodes have become nearly non-existent.

Only about 50 pounds just shy of one year of age, Stella is a petite Lab, at least by the standards of my last two.  This is actually perfect for this season of my life, as boating has become one of my family’s chief leisure activities and she fits very nicely on the deck of our Grady White.  While Bernie helped raise my children from infants to adolescents, Stella will help see them into and through their teenage years, and see my wife and I through the void of the empty nest as our children go off to college.

Most importantly, right now in this moment, Stella has been the biggest reason that my family and I can now speak about Bernie with nostalgia and gratitude, with smiles on our faces instead of tears.  Caring for her is a family affair with everyone, children and adults alike, readily volunteering to feed her, see that she gets her medications and supplements, take her out to potty, and take her for walks.  She is our household’s little princess and gives back to each of us exponentially all of the love she receives.

Dr. Roger Welton is a practicing veterinarian and highly regarded media personality through a number of topics and platforms.  In addition to being passionate about integrative veterinary medicine for which he is a globally recognized expert, Dr. Welton was also an accomplished college lacrosse player and remains to this day very involved in the sport.  He is president of Maybeck Animal Hospital , general partner of Grant Animal Clinic, and runs the successful veterinary/animal health  blogs Web-DVM and Dr. Roger’s Holistic Veterinary Care.  Dr. Welton fulfills his passion for lacrosse through his lacrosse and sport blog, The Creator’s Game.

A Cautionary Tail Of 3 Dogs